32. A Harvest of Souls - Talking to Those Other Fools

This article has also been reposted at the Unwise Ideas blog at http://thorsunwiseideas.byeways.net/2004/11/06/32-a-harvest-of-souls-talking-to-those-other-fools/#more-126

"They had the information, but not the knowledge" - David Ignatius in the IHT, discussing information overload in the CIA; 30 October 2001 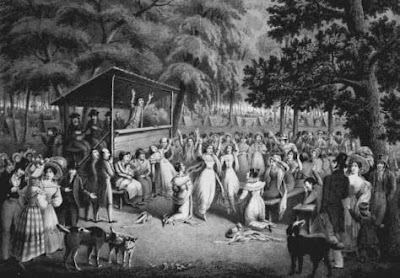 Common wisdom on the networks is that George Bush won the 2004 American election by harvesting the souls of America's lumpen proletariat. This was made possible because almost alone amongst Western democracies, America has a large committed religious constituency, and any constituency, whether it be for religion, football or collecting bottle tops, is a honeypot for the politically ambitious.

There is a kind of self-evident truth about the political potency of religion in America. However, I think it is a surface truth which misses some underlying insights. Are ordinary American people really so different from ordinary European or Australian people? Yes, these Americans are famously ignorant of the wider world. They are insular in their ideas, but polite to strangers. They are quickly offended, and ruinously litigious. They are spectacularly self-indulgent with their diets, lifestyles and the prolifigate use of material resources. These characteristics may be extreme, but none are unique. The preceding description could fit any number of my Australian countrymen.

Indeed, Australians have also just re-elected a conservative government. As in Bush's America, that government was essentially elected by so-called middle and lower class people even though the declared and covert policies of the government arguably run counter to the interests of the working electorate. Australia is not a country given to overt religion : about 15% of people go to church regularly, and the towns are dotted with empty churches (like much of Europe).

Bush did indeed use the religious electorate, but was that his secret weapon? I think not - not at base. The instrument used so effectively by Bush, and by his Australian alter ego, Howard, was the latent anti-intellectualism which permeates much of both cultures. In the American case, the Bushites were able to marry anti-intellectualism to a faith based movement. Faith corrupts, and absolute faith corrupts absolutely. Bush and Howard were utterly mendacious in manipulating anti-intellectualism as a populist weapon, but that is not the point.

The point is that anti-intellectualism is not equally available in all cultures for political misuse. There are parts of contemporary Europe and elsewhere where it is not a social handicap to be known as someone with an exceptionally efficient brain. There are places where individuals who challenge accepted wisdom are not considered cultural lepers and political traitors.

What is this "intellectual" thing anyway? Clearly we are not all born equal when it comes to doing mathematics, playing darts, dismantling an engine or writing poetry. The catalogue of possible aptitudes is very long indeed, and only some of them are traditionally associated with "being an intellectual". Maybe "being an intellectual" has more to do with a style of using our brains than any skill in actually doing it. We all live on a ration of 24 hours per day, and we all make choices about how to allocate our attention over that scarce time. In other words, we choose which mental spaces to live in.

Intellectualism in common parlance carries a flavour of dubious and elitist political activism. Allocating mental time and space to political stuff never appeals to more than a minority anywhere. It takes a certain amount of external threat or discomfort before an average person will give over time to political choices. When choices must be made, the chances are that these apolitical people are short of essential information. They probably haven't spent time and mental space on learning about religious minorities in Iraq, Chinese urbanization or the state of the Federal monetary reserve. When the political choice becomes urgent, it is too late to learn about these things, even though their impact on a voting individual's prosperity or survival might be crucial.

Whatever an intellectual is, it seems that there are people in every national constituency who are better informed about complex issues, and world wide issues, than the average voter. These better informed people are more or less qualified to make democracy work at a national level. They may disagree bitterly amongst themselves of course, but at least they are disagreeing from a base of widely gathered information.

I have suggested that we choose the mental spaces we live in. "Choose" may be a misleading word here. A few rugged individualists test every new proposition to death, and have a visceral distrust of authority as the validator of truth. I suffer from this skeptical tendency myself, and it is rarely a comfortable place to be. As for the rest of the world, well most folk permit themselves to be informed through a variety of culturally approved conduits. The big divide between a New York intellectual, an unemployed Ohio steel worker and a Texan cowboy might be less in their various mental aptitudes, than in the conduits they will accept for channeling "truth" to their brains. That is, they have differences of attitude.

Let us suppose that we wish to play politics on a national scale (in America, Australia ... wherever). How do we win the confidence of all those folk who resolutely refuse to allocate their scarce resources of attention to learning about the wider world ? George Bush and his friends have found a working answer to that. The American cultural paradigm has a religious conduit of trust available for short-circuiting the indifference of ordinary people. It is there as an entrenched and continuous vehicle for conveying information or misinformation. This conduit of trust can give coherence even to the Orwellian spectacle of an extreme anti-labour millionaire capitalist pretending to be an ally of the ordinary guy at the local hamburger bar.

If Bush & Co. have won the hearts of the lumpen proletariat, America's would-be intellectual elite have only themselves to blame. Like the ordinary guy at the local hamburger bar, they are recklessly self-indulgent. Their indulgence takes the form of spurning communication with folk who don't happen to share their particular mix of aptitudes. Lenin, Mao Zedong and Hitler all opened channels of communication with ordinary folk -- and betrayed them with devastating consequences. Most religious prophets, pop-idols and marketing gurus have similarly hidden their superior airs under a bushel, and found power through feigning a common touch. Elites of all kinds (techies, scientists, Olympians, billionaires ... ) normally spurn reaching out to the unwashed. It makes them feel sexily superior, and by the time a pogrom arrives it is too late.

So is deception a necessary condition for appealing to folk beyond your circle of knowledge and expertise? Deception is surely a quick and dirty route to ignorant minds. For the politician, once power is seized through populism, it can be held by other means. History is also replete with examples of such deception being unmasked, usually at the cost of much blood and suffering. On the other hand, in those cultures where "intellectuals" have arrived at some accommodation with other folk, there are the makings of a win-win situation. Cultural democracies may not claim that "all men are born equal", but they do accept that all men and women are worthy of talking to as equals. That kind of respect is learned at your mother's knee. It is a product of child rearing, and the culture of the schools where your children come to maturity.

All opinions expressed in Thor's Unwise Ideas and The Passionate Skeptic are entirely those of the author, who has no aim to influence, proselytize or persuade others to a point of view. He is pleased if his writing generates reflection in readers, either for or against the sentiment of the argument.

"A Harvest of Souls - Talking to Those Other Fools" © copyrighted to Thor May; all rights reserved 2004