This is the true tale of an epic journey. In 1962 my family made a doomed trek across a vast continent in search of a dream. Our family was financially poor, but rich in hope. My father was a carpenter. The dream had sustained and united us right through my childhood. Then one day we came to the end of Australia, and our dream collided with time. We lost it forever, but to have lived that trek and the years which came before it made us what we were - something special in a down-at-heel world. 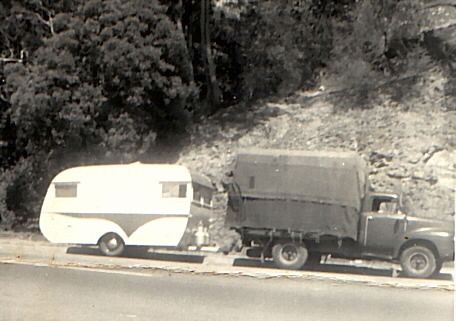 God, where is he taking us? The road swirls

And whips; gravity heaves the truck

Down, the razorback plunges

With its paroxysm of jungle

Waiting to suck the searing rubber, tear us

Off this sliver of bitumen.

What is the old man doing? Hell

The brakes! That's it, something wrong...

What a way to go, sacrifice in a red garden chair.

So all our futures have arrived; family dies on mountainside,

Youth found under refrigerator on back of truck .. it's slowing

He's smashed her into crawler and the gearbox is screaming,

We've hit the rise, it's gonna' be okay.

A cut brake line, our moment of transit

Out of control, almost, saved by wit and desperation

For living out the dream. Such a dream to live by..

Traveling across the years of our lives

The power of mirage has saved us

Our words have swept stream upon current,

And far into the memory of hope five lives hurtle

In this red Bedford truck

Parents and a babe are packed in up front

Catching the drama, a roar of engines, near misses,

While out of sight and mind a girl

Crouches on a precipice of questions,

Insecure as the bouncing truck tray; her brother clings

To the slats of a lashed-down garden chair,

His vision framed over the tailgate

In an arched horizon of the long road back.

A time past, when the rainbow snake roamed

Supreme with promises of things to come,

Stories that shimmered fell from my father

As he shaped and brought the speech of heroes

To our house. But then one day

He went north, we went south

A village school in pine trees.

Hurled him into cloudbanks : invisibility

And always his singing hammer on corrugated iron,

The carpenter burnt, buckled in the savage sun.

They shipped him out, I heard it

A lifetime later, for hunting with the blacks,

While the master-race sipped pink gins

In their fan cooled club and sneered

Until he cracked, by their standards :

Lay calmly on a grassy bank, set the Lee-Enfield

At a deadly range

For the contract foreman's bungalow

And wiped its gleaming roof

With good-bye kisses of hot lead.

A glint of sun on its wings,

As he fingered silver cutlery, wine in chilled glasses,

And a promise floated in between raw worlds.

The islands of paradise were way below,

Strung in green and gold on a turquoise sea :

To this he would return.

The break point, the parting.

No more putting off tomorrow now.

It is Christmas, nineteen sixty-one.

This year I finished school in a weary Sydney suburb,

Kicking at other people's gateposts.

Here at toe's end is a path, a beginning :

How is the dust on your shoes, hombre,

And the bedazzled light in your eyes ?

The dream will change, it whispers,

If only I can see

Above the eyebrow of hard roof-lines

To that ancient rainbow snake again :

In the shimmer of mist falling

From the walls of our valley.

Is today written with the quality of passing ?

Who amongst them knows the high wire

Of sudden self-awareness, the vertigo of teetering

On the very edge of escape ?

Which of them cares ? Looking into the flabby faces

I abandon them, step through the facade,

Burn off their narrow strip life of shop-fronts and carparks

To embrace the grey sky.

In wasteland at the city's outer reach

The crumbling brickwork of old Europe ...

And have camped for two weeks above a Chinese restaurant,

In a pub yard below the Bedford waits,

Lashed shipshape, loaded to the gunwales

With everything in the world we own and dare to keep.

Later, in the winding miles on miles

To the ends of a rugged continent

That van will pitch and smash its chassis to a tinder,

But on this first brave, tremulous day

Our waggon-train moves out unmarked

By the city's self-obsession.

Here is a festive season tale, brushed in water-colour,

Our dry Southern vision is numbed by potent green

Lush wild undergrowth at every verge.

Ancient obelisks, the Spyglass Mountains, are anchors in time

Against a gunmetal sky

With tidal savagery, the trick of an eyeblink gone.

Now picture the blackness of a tropical night,

Beneath some hint of spreading branches, shelter

From heaven, for this is the Deluge,

And a close encounter with Christmas Eve. Very close

In a sixteen-foot caravan with ankle-deep mud by the door.

Dad is checking out the local wildlife in a pub

While mum and the kids find time to drift,

Where each untethers a small island of private space

Between bunk's edge and a plywood bulkhead,

Floats behind the roaring wall of water...

Later there are scrapes and thumps,

Muted swearing, a new weight on the bedclothes

At daylight we are reassured and bereft :

Santa Clause has called for the last time, we know

That night we lost permission

To be just kids at home.

Then gradually in a haze

Between cloudlight and rising dust, our trail beam,

Our vision, our fragile hope diffuses.

Maybe it is the platinum blonde with mauve eyes,

Who is the sentinel to raise alarm. Her coolness.

Outlanders are not welcome. But it takes a while

To notice the swift stiffening glances

At our truck number plates, the generosity withheld

Against them southern intruders. A casual contempt

Without touching the hand that holds it.

We haven't planned for a battle of minds

In the tatty caravan parks, just outside the lamplight limit

Folk stand that stance of "those who are took"

And know it. Shallow anger, a shrug

A tired slap at mosquitoes.

Their hollow eyes size up our rig :

For each drop of petrol scrounged

A rhythm of destruction that owes nothing to rock-n-roll.

Already it has wrenched three towbars

And now the superstructure is tearing

With a rasp and crackle at each lurch.

What have we done ? Is our hubris so great ..

For torture by a crescendo of collisions.

The continent wrinkles on its eastern edge

With a two and a half thousand mile frown,

While on the gully ledges wiry gums and sassafras

Harmonies of this astringent country are in my footfall

And axe hand : I understand its laws

For my people have mostly dwelt

On an apron between the mountains and the sea.

Almost sheer to the Coral Sea

And wet breath from the South-East Trade Winds

Feeds a green profusion in the deep ravines.

Rich and poisonous for the unwary;

We don't yet know this face of nature.

Our perilous unbraked rush to paradise

Is meeting with the ordinary terror of the earth.

Trapped behind a travel poster reef.

Someone forgot to mention that before,

Or speak of the missionary who ran screaming from the surf,

Dead in three minutes. I put my flippers away.

How shall we choose ? Bowen

A dozen shades of blue and green. Ingham

Nestling in the sugar fields

Under a brooding mountain, wreathed with summer storms ..

How you charm and puzzle us;

Gathered by the hitching rail of a collapsing barber shop.

For the tourist buck that's gonna' come, they mutter,

Just as soon as them buggers in Canberra

Are exiled to god's gulag archipelago.

At some midday nowhere point, lost in rank grass

We run out of road,

The expedition stops to study its navel,

Scratch its damp hair, prickly with heat and insects,

Wipe back the rivulets of sweat.

Should we ask after the Vision?

Or wonder who's paying for tomorrow's dinner?

There is a shack to be had

Standing into the sea and the sky

On a headland at Port Douglas,

A one-pub town made famous in the Dreamtime,

Now every owner of an elbow on the bar

Has a movie-set tumbledown house

Waiting to be discovered by visiting millionaires.

In dirty cotton shorts and his birthday suit,

Loops a fishing line around one big toe

And drops his bait

Into the shifting reflections of the bay.

They are waiting for Godot at Port Douglas;

The stingrays wing lazy as V-bombers

Under the movie-set crumbling wharf.

Mitha's boys got threepence for luck

To buy lunch with ... enough

If you skipped school

For a trip by tram

To the very edge of promised lands,

Highways now bandage the body-bulges of suburbia there,

Where my dad hunted rabbits through scrawny brush,

Billy May is at the end of his track.

Seventeen years the hammer has sung,

Building the maker out. For when they tidy up,

Polish the windows, pay off the slaves,

A carpenter is always on the street.

And now this small, angry man

Is trudging from door to door

In paradise without an admission ticket,

In the deep North where southerners have no rights,

Naked we came and naked we will go :

No place shall be called "Our Home".

I put the dream away.

It is, after all, a time for surviving.

You there with the pointy ears,

And you of the insouciant beak, yes you too

Lounging with your tail in your pocket :

What do you mean by it ? Being alive

And as for the cheek of you argentine ants

Don't you realize that my jackboot

Is about to crunch you to a cipher ?